I spent three months in Budapest, working for the newspaper “Budapester Zeitung”, and totally fell in love with that city and the Hungarian culture. I had a lot of time for myself that I used for taking pictures of this … Continue reading → 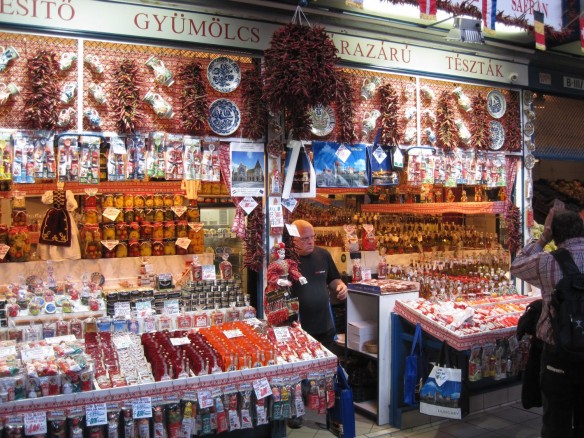 1) I could in theory reduce my diet to paprika/pepper, sour cream and “nokedli” (kind of Hungarian spaetzle) and would be perfectly happy.

2) In Hungary you can only give your child a name from a certain official list. I guess this list – at least for the male Hungarians – is very short because literally every second guy is named “István” or “Gabor”. Same thing with the family names. Here is a hilarious story: I know a german woman living in Budapest whose name is “Pia” – which unfortunately means “alcohol” in Hungarian. So she wanted to get a personalized number plate for her car…and got in big trouble, because the name was on the forbidden list together with “sex” and that stuff. She pushed it through. Only a few days later people stole the number plate. Obviously because they found it very funny! 🙂

3) I never lived for a longer time in a country where I don’t speak the national language before. Now I realized how dependent we really are on the media: If you don’t speak the language and can’t follow the news you know nothing! It’s a bit scary, actually.

Read more about Hungary in general here – or see a gallery my favorite photos of Budapest here.

Now that my three months in Hungary are almost over, I would like to sum up everything I know about this country. For myself to remember and for you as information. First of all: I love Budapest. I have never been in a city that is more creative or beautiful, but also I learned something about the Hungarian society. Many Germans, including me before I came here, don’t know much about this country, and the foreign media paint a rather dark picture of it. I am not an expert now, but I would like to share my experiences with you, tourist activity as well as deeper stuff… END_OF_DOCUMENT_TOKEN_TO_BE_REPLACED

Now the dust has settled. This strange feeling of constant excitement that you have on adventurous holidays is completely gone. I’m talking about the “everything new” feeling. You never get to clear your mind, you are unresting. Sitting in your room feels horrible, although it is the most normal thing to have some time during the day where you just do nothing. But in this state of mind I am describing you get beyond bored every second that you aren’t busy – you get mad! Man, I am in Budapest! Sitting in my room and watching TV is a NO GO! What a pressure. Will I find friends or will I be alone all the time (which feels like “forever until I die” in this irrational psychological condition)? Maybe it’s just me thinking too much, but I bet there are people who understand me. Everybody who claims to be totally relaxed and happy all the time after moving abroad alone is definitely a liar!  END_OF_DOCUMENT_TOKEN_TO_BE_REPLACED

I recently needed some adventure and tourist activities, so I went on a caving tour in Buda. It was close to masochism, but such a great and unforgettable experience that I’d like to write about it. We were a group of thirteen people, a colorful mix of nationalities. When I pulled on the outworn caving overall, my hands already felt dusty. We entered the cave through a little metal door in a hill that didn’t look spectacular at all, more like a storage room. Behind there was a low tunnel and then we were in the cave. END_OF_DOCUMENT_TOKEN_TO_BE_REPLACED

I was always driven by the idea that I should go abroad for a longer time at least once before I’m getting “old”. They told me: “Take your chances as long as you’re a student, because afterwards…” And the scary thing was they never exactly defined what would happen afterwards. I guess they meant a job, a family, the seriousness of life. Not that these things are bad, but the fact is: Afterwards you will never be that free again. So I actually felt obliged to myself to do this. Not because everybody does it and not because of my career, although the last one is a positive side effect. No, I just wanted to know how it is like living in another country. Maybe I also wanted to prove myself that I am able to do it. But most importantly I love travelling, and if I can’t get out of Germany at least once a year I get really restless. So I organized myself an internship of three months in Budapest, at a German newspaper.

Three months is not a holiday trip however. Only once I have been abroad for a similar long time. After my graduation I travelled two months through Australia with a friend. It was amazing but we didn’t actually live there, we were just passing through with eyes wide open in wonder. This time it will be different. I know three months may sound like a short period, but for a person like me who just feels whole with family and friends it is a long time. There were times when I thought: “Why the heck do you do this?” And then again I knew I would be angry with myself forever if I didn’t.