I don’t particularly like New Years Eve. It’s always a pain organizing something fun. Inviting all your friends is impossible because you don’t have the space or they have other invitations already and they NEVER tell you if they will come until the very last day. Why is this so annoying? Because some weird social pressure tells you New Years Eve has to be the most special and legendary night of the past year. So it will definitely become the very opposite. But I don’t want to complain about “Silvester” how we Germans call it. I only say this to explain why this year me and my boyfriend decided to flee from this pressure and do something on our own instead: We went to Berlin, to the great Open Air Party at the Brandenburger Tor. I will share this experience with you.

It’s a 3,5 hour drive from Bremen to Berlin. There are many special offers for holidays in Berlin around New Years Eve and you can really indulge yourself with a nice hotel when you book in advance. We arrived on December 30, so we could spend the whole last day of the year sightseeing before heading towards the party area. Berlin is a wonderful city, no doubt about that. We walked down the Oranienburger street past the Synagogue towards “Hackescher Markt” and after

that to the Alexander Square with the TV Tower. The quarter is quite alternative, with nice design shops and graffiti-wall-backyards. It reminded me a little of Budapest, but I have to say that I liked Budapest more. From Alexander Square we walked along the street Unter den Linden that leads towards the Brandenburger Tor. On the way you can see many impressing and beautiful

But now the important stuff: The party area is on the Street of July 17 that goes through the Tiergarten park. It ends at the Großer Stern square with the victory column in the middle – altogether it is about 2 kilometers long. Officially 700.000 people attended the big New Years Eve Party. I guess it were about a million in fact. But to my surprise it wasn’t too crowded. Even quite close to the stage is was okay, like on a normal concert.

The area already opened the day before. At noon there were already lots of people eating and drinking and watching the rehearsals on the big stage which went on until the evening. The actual show started only at 9:45 pm, but before there was already a DJ playing. Nevertheless the waiting was boring. Also it was very cold, but thank God there is mulled wine! 🙂 The show itself, which is broadcasted live on television, is impressing and I really liked it. The music is maybe not everybody’s taste although they try to provide a good mixture. But let me give you a good advice: Don’t come too early unless you have a back and legs of steel! There is no point seeing all the rehearsals, it only spoils the actual show for you. Altogether we stood there for 8 hours and I was EXHAUSTED like almost never before in my life!! 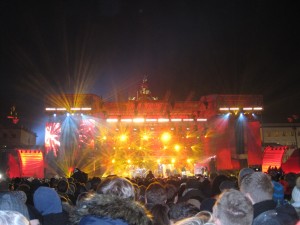 And make sure that you have a map or something when you go home after the show! When we left the party area, the city was in a condition reminding of civil war. Smoke and deafening bangs from fireworks in the air, huge crowds of people running through the streets, all the traffic shut down, the police blocking the streets that you have to walk to the metro station… It was insane and I never saw anything like this before.

Well, that was the impression of a girl from a nice little town being in Berlin on New Years Eve. It was exciting. But next year I might give the “inviting all my friends” another try. 🙂