Now that my three months in Hungary are almost over, I would like to sum up everything I know about this country. For myself to remember and for you as information. First of all: I love Budapest. I have never been in a city that is more creative or beautiful, but also I learned something about the Hungarian society. Many Germans, including me before I came here, don’t know much about this country, and the foreign media paint a rather dark picture of it. I am not an expert now, but I would like to share my experiences with you, tourist activity as well as deeper stuff… 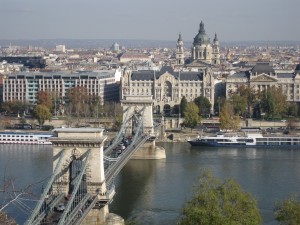 In the centre of Budapest everything, every street, square and building, is stunning. In Pest you can go shopping on the street Vaci utca or in the Central Market hall, where you find all kinds of vegetables and Hungarian delicacies. You have to visit the St. Stephans Basilika, which is all gold inside. You can see the mummified hand of the first Hungarian king Szent István there and you can climb up its tower for 500 Forint to have a great view over the city. Hero square is a great display of Hungarian patriotism. The building of the parliament is more beautiful to look at from the opposite side of the Danube, so cross the river on one of the three gorgeous bridges and there you are! My favorite bridge was the green Szabadság bridge. The white Erzsébet bridge is more modern, the Széchenyi chain bridge is also very impressing with four lion statues guarding it. On Buda side the Buda castle is a must-see. On one hill you have the royal palace, the white Fisherman’s Bastion where you have a stunning view over the Danube and Pest, and the Matthias church, where Sissi and Franz Joseph of Austria were crowned. And by the way, speaking of Sissi – the palace where she spend her holidays is just in the little village of Gödöllö near Budapest. (By the way, all these things must be visited twice: once during the day and then again at night-time, when the lights are on.)

Budapest has many thermal baths, which are supposed to be very healthy. Some of the old Turkish bath houses like the Király bath survived from the time of the Osman occupation of Hungary, and they definitely worth a visit. You have pools of different temperature and saunas there as well. In autumn I would advise you to have a walk on a sunny day over the Kerepesi cemetery. Many famous Hungarian people are buried there and the park with the old graves and statues has an unique atmosphere. Apart from that do eat delicious cake in one of the coffee houses – maybe in the Café New York if you aren’t tired of gold ornaments already. It’s gorgeous although it’s insanely expensive! In December you can also go ice-skating on the Ice Rink in the city park, and drink mulled wine on one of the many beautiful christmas markets. The biggest one is on Vörösmarty square. Also it is very cheap to go to the Hungarian State Opera so see a classical opera or ballet. And if you need some adventure: do a caving tour in Buda, test your liability to claustrophobia and get yourself some bruises! 🙂

Food is never very expensive in Budapest. In an average hungarian restaurant, which you can find almost everywhere in the city, you will get traditional Hungarian food with meat and side dishes for about 2.000-3.000 Forint. In district VII there are nice Jewish restaurants like the Spinoza Ház or the Macesz Huszár. You can get pizza or kebab at every korner. If you want more healthy fast food you can always go to one of the many Hummus Bars that are spread all over the city. They have falafel, hummus and laffa bread in many variations and you can have the food as take-away or eat it there, the service is as friendly as in a “real” restaurant. Although eating out is not very expensive, you can still save some money if you cook at home. There are lots of German supermarkets like Penny and Aldi in Budapest. But I also often went to the Hungarian chain CBA. Here is an example: I bought two bottles of orange juice, pork filet (500gr), cooking cream (0,5l), one head of lettuce, sour cream (tejföl, 250ml), bananas, one package of toast, onions, peppers, and two fresh rolls for altogether 3.135 HUF (that’s about 10,50€). If you don’t by foreign products like Nutella the prices are low compared to Germany.

The Hungarian cuisine is really good, although maybe not for vegetarians. Typical Hungarian dishes are gulyasleves (goulash soup), chicken paprikash, fish soup, stuffed palacsinta (pancakes, with meat or sweet, as a dessert), langos (a snack that comes normally with sour cream and cheese) and lecso (a kind of ratatouille with tomato, pepper and smoked sausage). Literally everything comes with paprika spice, and many things also with “tejföl”, which is a kind of sour cream. For the sweet-lovers you have a huge variety of cakes, like the famous Dobos Torta or the Zserbo slices. My favorite was the Kürtöskalács (chimney cake), a cake with a hole in the middle and sugar on the outside. When you buy it on the street it’s still warm. And not to forget the Túrórudi, a chocolate bar with a kind of cream cheese filling. Yummy! 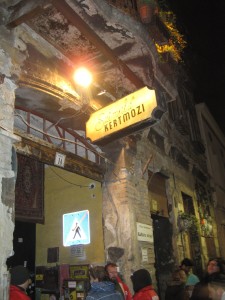 At night Budapest is alive! The atmosphere is amazing there, so many people on the streets, you are never alone. My favorite bars were all in District VII. There you have the famous ruin pubs like Fogas Ház and Szimpla Kert. Szimpla looks very cool, it has a very alternative style and you should definitely see it once, but the locals don’t go there and I would advise you to leave before it gets too crowded with drunk people. You can go to the Lámpás Bar which is very cosy, or any other bar in that area. They are all great, with creative decoration and quite cheap drinks. Beer is much cheaper here than in Germany, for 0,5 liter of the Hungarian brands Arany Aszok or Soproni you pay between 350 and 550 Forint (about 1-2€). Cocktails and Pálinka, the typical Hungarian fruit schnaps, are much more expensive.

In 2010 the conservative party Fidesz won the elections with a super-majority. The occupy two-thirds of the seats in parliament and therefore they can (almost) do whatever they want. The new media law (2010) caused popular outrage in Hungary as well as in whole Europe because it was seen as a constraint to press freedom. It created a national controlling institution that can for example impose financial sanctions on media companies. Not good. And there are many changes in the Hungarian constitution and general law since then that must be seen in a critical way. For example the government 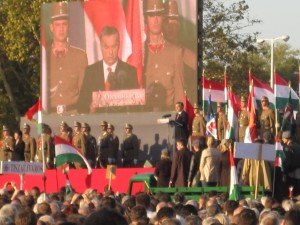 enacted a law that forbids homeless people to sleep in public places or places of cultural relevance. If you take into consideration that for example in Budapest there are countless homeless people (I saw them every day) and not enough accommodations in the homeless shelters, this law appears very cynical. Also there are nationalist and right-wing tendencies in Hungary. The right-wing party Jobbik is the third strongest party in parliament, and they openly agitate against Jews, Roma (which are the biggest ethnic majority in Hungary) and homosexual people.  That all sounds pretty bad. But as a foreigner in everyday life you won’t notice. Hungary is not a dictatorship, you know. All these tendencies are just tendencies. They are worrying but who knows what will happen next year, when the Hungarian elections take place again?

I talked to the few native Hungarians I got to know here, and the impression I got was: They are all quite depressed about their situation. One girl told me she would elect next year because none of the parties could make anything better. Another girl went to the counter-demonstration against the government on October 23rd, the national holiday and celebration of the Hungarian Revolution in 1956. Many young Hungarians leave the country because they want a better life – the average income for a full-time job is only about 400€ after tax. That’s maybe enough to survive, but for a nice family life it’s not enough. There are many poor people here. I don’t really know about the situation of the Roma, but once I visited a community centre in District VIII and asked the guy there why the kids (mainly Roma, you could see it from their complexion) spent their afternoon there instead of going home. He only said: “That’s too sad to talk about it.”

Nevertheless, I think Hungarians are friendly and nice people. Sometimes I had bad experiences when I met people who didn’t speak English, they were rude sometimes. Maybe they are unnerved by all these foreigners visiting their country but not speaking Hungarian. Well, I at least tried to learn this language, but within three months I only achieved this:

Which is only to say hello and thank you and goodbye, order something, introduce myself and talk about where I live and what I do during the day, simple things. The words are very hard to pronounce and the language has almost no similarities to German, English or Spanish. But I am glad I learned this little bit of Hungarian because it really helped me during my time in Budapest.

So that’s it! Now you know a nice mixture of nice and not so nice things about Hungary. I can only tell everybody to visit this amazing and interesting country. I had the best time ever. Budapest, I will miss you! ❤

2 thoughts on “Summary: What I know about Hungary now”